Some times ago my mum gave me this Lebanese recipe book. I knew most of the recipes, but not all of them. I knew about this one, even though I rarely have it, as it is not one my grand-mother’s favourite, and not one that you can find in a common Lebanese restaurant. I love aubergines, so I thought I would give it a go, especially that it is a healthy recipe, low in fat and carbs. 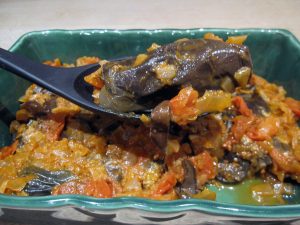 1- First, the filling:
Very straightforward: put everything except the rice into the food processor and mix. Then incorporate the rice gently with a spoon.

2- Then the aubergines:
Wash them and keep the two smallest ones on the side, we will use them later on.
Cut off the stalk and remove the core using an apple corer. Keep half of the flesh, and get rid of the other half.
Fill the aubergine up to three quarter with the filling (leave a little bit of space as the rice will swell a little bit).

3- Last step: the cooking:
Slice the two small aubergines you left on the side, chop roughly the flesh you removed from the other aubergines, and chopped the onion.

Put the onions in a hot cooking pot with the olive oil and cook them for 3 to 4 minutes. Then add the tomatoes, the flesh and slices of aubergine, salt and pepper and cook again for a couple of minutes while stirring from time to time.

Remove from heat, and line the aubergines in the pot. Dilute the tomato puree in a glass of warm water, pour it over the aubergines and cook covered over high heat for 25 to 30 minutes, while stirring from time to time.

Then reduce the heat to low, and leave for another 10 minutes (the liquid should be almost completely evaporated and the sauce a little bit thick). It’s ready, bon appetite! 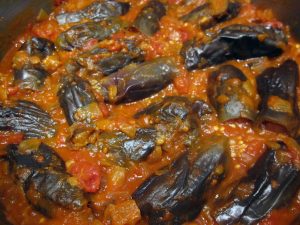